There are three sides to any story 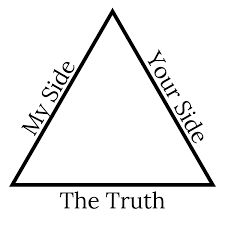 A brilliant quote that was once sent to me by an Irish friend who had witnessed an argument between two colleagues. “There are three sides to any story, yours, mine and the truth”.

As a mediator who has frequently sat between two sides at loggerheads, nothing could be more accurate. And it is something that employers, Managers, HR, Trustees, Directors etc., and even those investigating workplace incidents of any description, would do well to bear in mind.

Because disputes, conflict and any differences of opinion on incidents that have happened will inevitably arise at work. This is not necessarily a bad thing. Those who feel passionately about what they are doing may come at a problem from a different angle. And, until both can agree on what the real story is, very often no progress can ever be made.  Two people may witness the same incident, but their recollection can be very different depending on how they feel and relate to the people at the heart of the matter.

So, always remember this saying when presented with a problem, especially some form of conflict. When somebody makes an accusation and somebody robustly defends it, there are three sides and the truth will often lie somewhere in the middle.

This is why we always say that accusations made anywhere are merely allegations until the evidence has been considered. And those who respond and vehemently deny these allegations are only presenting their side of the argument.

Your duty as an employer is to find out, as far as you practically can, where the truth lies, or at the very least, the balance of probabilities. Then, once you have established this as clearly and as certainly as possible, you need to act reasonably and sensibly in your response to the facts.

If the situation is serious enough and warrants it, hold a formal investigation. This is not to be done lightly – it is not necessarily straightforward, and could be quite time consuming, but it needs to be done properly. ACAS has a good guide and we have lots of practical advice and expertise too.

Before you even start, decide who will investigate. Establish the terms of reference and decide who needs to be interviewed. Give all sides the opportunity to explain themselves, ask others what has happened and carefully note down their responses.

In really tricky cases, you may need outside help. We have held plenty of such investigations, and the very fact that they are being carried out professionally and independently, often sends the message that matters are being treated very seriously.

But, however trivial the incident, however straightforward it seems, leaping to conclusions, making instant decisions off the cuff is never advisable. Even in seemingly the most open and shut case.

If you have not taken your time and drawn breath before acting, then if things ever come to a head in an Employment Tribunal, that chain of events will be looked at very closely. And, if there is one thing that Employment Tribunals hate, it is employers who act in haste, without factual evidence and due consideration.

It’s called acting reasonably and proportionally, based on the merits of each case.