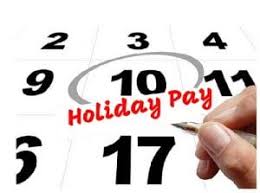 One of the most frequent requests we get is regarding holiday pay. How much annual leave does a worker get, how much should they be paid?

If employers find these calculations difficult, they are not alone. The picture in the UK is confusing, and especially so for those who work irregular patterns, or who receive variable amounts of pay.

The first, and overriding principle is that the law expects employees to take their annual leave. And to be rewarded sufficiently well so that they are not deterred from taking it because they lose out financially.

So, bear the following in mind:

Many employees are workers with fixed hours. If they are also on fixed pay then the calculation should be very simple.

For such employees, their pay remains the same every month, regardless of whether they take leave. They simply take their full leave every year.

Part-time workers with a fixed rota or fixed hours, will have a pro-rata entitlement according to their working hours.

If they work a regular three days a week on fixed hours, for instance, then their annual leave will be ⅗ of a full-time allowance (including ⅗ of their Public/Bank Holidays), but then every time they take a week’s holiday, that will only count as 3 days leave.

* For practical and reasonable purposes, you are advised to round up to the nearest hour, half or whole day, you may never round down.

Their pay will be their normal rate of pay and their pay packet is unlikely to change.

Full or part-time workers on fixed hours, but variable pay

Many workers will be on commission, incentives and regular overtime, so their earnings will vary each pay interval. Employers used to think that such workers only needed to be paid basic pay while on leave.

We have always disagreed, as the Working Time Regulations 1998 has been clear on this matter, and a number of cases have borne this out. It is now firmly established that in such circumstances, workers need to be paid average holiday pay. To determine what constitutes e.g. regular overtime, if the employee does paid overtime most pay intervals, then that means it is regular and, therefore, average holiday pay is required.

The way to work this out:

Most regular payments can be included in this calculation, though Benefits in Kind and one off, annual or quarterly discretionary bonuses can be discounted as well.

The issue for employers is this is no longer simple to calculate. The rate will vary from pay period to pay period, on a monthly or weekly basis, to calculate holiday pay. Though many payroll systems will probably be adapted to be able to cope with it.

It is also worth reviewing how you approach groups of people who may do varying amounts of overtime or commission. Rather than having to constantly review who is doing regular overtime, it may be simpler to pay all of the group on an average basis.

This used to be simple, but since a recent case it has become a lot more complicated, and potentially more expensive. Note that the rules are different for casual and short-term contract workers, this only applies to those on permanent contracts.

Many such workers work in seasonal or educational roles, and used to be paid an extra 12.07% (5.6 weeks is 12.07% of a 46.4 week working year, in other words the calculation had deducted 5.6 weeks leave from the annual entitlement) to cover holiday when they were not working. This is no longer allowed as it tends to underestimate their leave pay.

Such workers should now get the full 5.6 weeks annual leave allowance, even if they only work part of the year. And the holiday pay is based on their pay for the weeks they work. Because of the nature of their work, such pay may be variable

So, the Government recommends that the calculation is done on:

However, given that 28 days is the minimum a full-time worker can expect for a year’s work, those working for as little as two weeks could have accrued just over one day’s holiday. Being very, very precise, 1.075 days.  Such rounding down with such a small decimal amount is probably acceptable, but generally always round up.

If they have not taken that leave during the time they work for you, then in their final pay packet they should be paid the accrued holiday. And that should be at the daily rate you have been paying them.

The same will apply to contract workers, you may well have taken them on for a three-month period.

Finally, agency workers are also entitled to holidays. At this point, it is worth checking with the agency exactly how they handle this, as those who work regularly for them could be provided for, and the rate to your organisation should reflect that.

For casual workers, variable hours workers and contract workers, it used to be the practice that employers paid an extra amount to cover holidays. Typically, 12.07% (5.6 divided by the 46.4 weeks not on holiday). This was known as rolled up holiday pay.

For some time, this practice has been frowned on by the Courts, as it does not encourage the worker to take holidays, but in fact, to continue working as they earn at an enhanced rate.

And, since a recent court case, those in many sectors will be forced to finally abandon the practice as it also miscalculates the amount of pay such workers should receive. If you have traditionally paid such rolled up pay, then it is a practice that is open to legal challenge. And you may well find that such a challenge could prove very expensive, as employees could be missing out on 28 days every year.

One final point about holiday pay. In many circumstances where employers would think that their employees would not be entitled to holiday, it continues to accrue. The long-term sick, those who have been furloughed, those on family friendly leave or even in some cases, on unpaid leave e.g. sabbaticals, can continue to accrue holiday.

And, often this accrued holiday only really comes to light when the employee leaves your employment and the holiday entitlement is calculated.

As ever, these are complicated calculations. If you have any questions, then please contact us and we should be able to help. There are a number of publications on the Government’s website, detailed below, which may well be helpful. But they are not light reading.

Guidance on calculating holiday pay for workers without fixed hours or pay – GOV.UK